Case Study: "The Wizard, the Professor and the Jellyfish"

A strange title. Meaningless to most. But it means something to me, about me. It is the name of a painting that gives a glimpse into who I am in a way a thousand, a million words could never properly express—whether told in the formal setting of a therapist’s office or a personal conversation with loved ones who want to—but can’t truly—understand.

So, to the picture itself. This is me. It is a recent portrait of me produced by and in collaboration with the British artist John Hyatt, Professor in Contemporary Art at Liverpool John Moores University’s School of Art and Design. But how is this a collaboration? Surely the portrait subject stands there whilst the artist paints? No, because what I asked of Professor Hyatt was an honest representation of who I was, of what I was living through in a specific moment in time.

And that was quite a complex story—as all our stories are. Having struggled with depression and anxiety for years, I also recently found I have a terminal organ disease—which I continue to battle. At this stage, perhaps as a coping mechanism, I began to plan for the inevitable, including a memorial image by an artist I’ve long admired, Professor John Hyatt.

Hyatt is not usually a painter of portrait commissions—especially in such circumstances—and he was uncertain at first, but soon we were chatting via Facebook and video, and a connection, a non-judgemental rapport between equals, was established from opposite sides of the Earth. An artist is nothing if not empathetic, needing to engage with and ‘inhabit’ his subject to accurately understand and depict it/them. Not that far from the role of the psychoanalyst, but much more emotive. 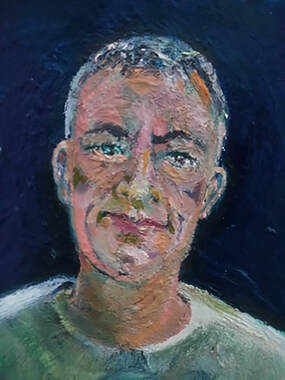 ​He was also generous in sharing his work-in-progress as it developed, allowing me to input, to question and for us to converse on key points. As such, this is a truly collaborative work showing a development, and better understanding, of myself on the part of both artist and subject. For instance, I am a great fan of The Tempest by Shakespeare, and this soon became a motif both for the artwork and my personal situation—finding tranquillity in the eye of the storm, the T-shirt referring to a Shakespeare quote, of life being ‘such stuff as dreams are made on’, the books and at the centre, me, the Prospero character, magician of the Tempest, Wizard of Oz.

John Hyatt also came up with the jellyfish motif in the surrounding sea creatures. I was unsure at first about this, but John stood his artistic ground, noting that jellyfish are a positive motif. They are the only creatures that regenerate their bodies: no matter what life throws at them, they adapt, recover and carry on. As such, not only did John learn about the inner workings of my psyche, but so did I; as he said in one message: ‘I am left with the idea of “a sea-change into something rich and strange”—maybe that is the undercurrent of the jellyfish? Not immortality but transmutation.’

Ultimately the result is a lasting portrait of me, warts and all, of which I am proud—in an area where so many feel shame and stigmatisation—and which says so much more than a thousand words could express. It is the turning of a negative into a positive: a journey on turbulent seas of self-discovery, friendship, healing, and understanding. Of course, there are really three people in this collaboration: the artist Professor Hyatt, the subject—me, and you—the viewer of the image.

I hope you can view this painting in the spirit intended, of me laying my innermost thoughts and feelings out on canvas, of reaching out to fellow travellers who sometimes stumble in life and simply saying…good, bad, and indifferent: ‘this is me’. 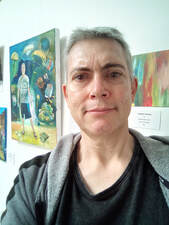 ​John Brookes emigrated from the UK and is a former Mensa Photographer of the Year winner.

Having come to Canberra over a decade ago he recently gained Australian citizenship. Whilst doing volunteer work in Fiji two years ago he suffered a life-changing illness, leading him from being a full-time charity communications manager to a new direction in community arts for health. This collaboration has been presented at Canberra’s recent ‘Resilience’, ‘IGNITE' and ‘Traces III, IV and V exhibitions, as well as by Professor Hyatt in Liverpool, London and Seattle. John Brookes is Director of Canberry Communications and has developed this into a full community project—matching those with disabilities across Australia with empathetic artists to create meaningful, positive portraits and self-learning. He launched the project at the 2021 International Mental Health Services Learning Network Conference in Perth (Virtual).
​ 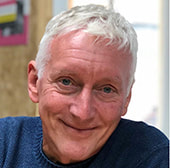 Since 2010, Hyatt has exhibited in Australia, Brazil, China, India, Ireland, Portugal, Japan, the UK and the USA. He has had a long and varied career and involvement in cultural practices, pedagogy, industry, urban regeneration, and communities. Music fans know John in many incarnations and collaborations but primarily as singer/songwriter with legendary post-punk band, The Three Johns.

John is Professor in Contemporary Art at Liverpool John Moores University’s School of Art and Design where he currently works, appropriately, from the John Lennon Building. He is Associate Dean for Scholarship, Research and Knowledge Transfer for the Faculty of Arts Professional and Social Studies, and Director of the Institute of Art and Technology. Following on from this collaboration he is open to future portrait commissions-—more at www.johnhyatt.co.uk or email john.hyatt2@gmail.com.

The two Johns remain friends since this project despite having never met in person, and they regularly converse via Facebook.
Talk on the painting by Professor John Hyatt, given at ANPA conference at Liverpool John Moore University, UK (1:13 length)
CONTACT US
Powered by